Doctors and dermatologists often warn against squeezing out acne, because this leads to other problems.

Here are a few possible consequences: What will happen if you squeeze out an unripe pimple? 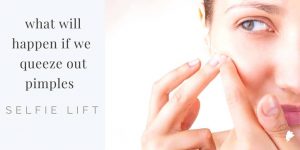 Thus, squeezing out one pimple can cause the appearance of several at once. What will happen if you squeeze out pimples without first cleansing the skin?

At the same time, contaminated sebaceous gland secretions penetrate the injured area and cause additional infection.

The contaminated bacteria multiply in place of the squeezed acne. And pus starts to accumulate in it. Thus, the safe acne turns into a problem purulent pimple. Another possible consequence of squeezing out acne can be the formation of scars.

A strong mechanical effect on the saline area initially causes an increase in inflammation. Then a wound appears, after the healing of which there are scars. If acne can be cured with cosmetic preparations by creams with drying gels, then it is possible to cope with scars only with the help of laser and other cosmetic procedures. What will happen if you press pimples in the nasolabial triangle?

Extruding acne in this area can lead to a clinical case. The whole difficulty lies in the fact that in this zone there are direct channels leading to the brain.

The ingress of liquid into this channel can even lead to death.

Want to join the discussion?
Feel free to contribute!

The best ways to get rid of bags under the eyes
Scroll to top
error: Content is protected !!